That cotton t-shirt you bought for £2 from a fast fashion brand? It’s fairly likely that child labour was involved in its production.

We’d all like to think that child labour in the fashion industry is a thing of the past. Sadly, that’s not the case, and most of us have been supporting it without knowing.

What is “child labour” in the fashion industry?

Child labour refers to the exploitation of children through work that:

Child labour in fashion can happen at any stage of the supply chain, from harvesting resources to spinning yarn and putting the actual garments together.

Cotton production, however, tends to be the most likely, since 71% of all child labour is found in agriculture.

But is child labour in fashion still a thing nowadays? 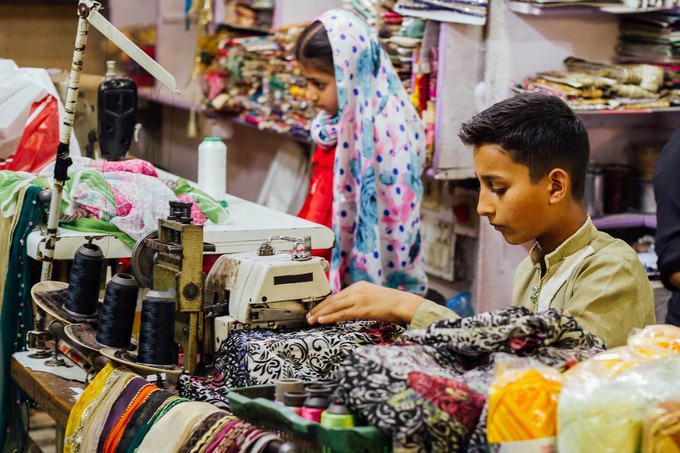 Yes, child labour in fashion is still a thing. Even though it’s forbidden by law in most countries, it continues to be a problem, especially in developing areas.

It’s not a coincidence that those are exactly the countries from which most fast fashion brands outsource their garments.

And, as if it weren’t heartbreaking enough that child labour in fashion still exist, it’s been rising, too. It declined by 30% between 2000 and 2012, but then the number of children in child labour rose by 8.4 million (reaching 160 million worldwide) within 4 years.

The COVID-19 pandemic was amongst the main factors, from schools being closed to the economic challenges it presented.

Why is there child labour in fast fashion?

Sadly, cheap and unregulated child labour is especially still a thing in fast fashion because it helps keep the costs so low.

Some of the reasons that maintain child labour in the fashion supply chain are:

Of course, it’s an extremely difficult situation, and nobody can solve it overnight. However, here are some starting points to fight against child labour in fashion:

Overall, we believe that being vocal and voting with our money are some of the best things we can do to fight child labour in the fashion industry (and beyond).

Just because we can’t see it, it doesn’t mean it's no longer there!

How to Buy Sustainable Clothes: 6 Questions Before a Purchase

It goes beyond finding eco-friendly garments! Here’s how to buy sustainable clothing through 6 questions, from mindset to your wardrobe and how you use it.

Do Sweatshops Still Exist in Europe & for Big Fashion Brands?

These factories aren’t as distant as we believe, neither in time nor space! Here’s the reality of sweatshops in Europe or behind popular high street brands.

Why the Fashion Revolution Still Matters Years After Rana Plaza

The Fashion Revolution movement started after this 2013 disaster: has this industry really changed when it comes to worker rights and environmental problems?

Together we can make a difference! Subscribe to the newsletter to stay up to date about fair and sustainable fashion. We plant a tree for every subscription! 🌳